Monsoon replenishes groundwater, but renders it unfit for consumption

TNN | Mar 6, 2018, 07.06 AM IST
CHENNAI: The northeast monsoon might replenish the city’s aquifers and bring relief to the residents till summer, but the rain seems to do little to improve the quality of groundwater.
A joint study by researchers from University of Madras and Anna University shows that after the monsoon, concentration of heavy metals like lead, iron, chromium, nickel, cobalt and manganese increases beyond acceptable limits in the water table in localities between Besant Nagar in Chennai and Sathankuppam in Kancheepuram district. 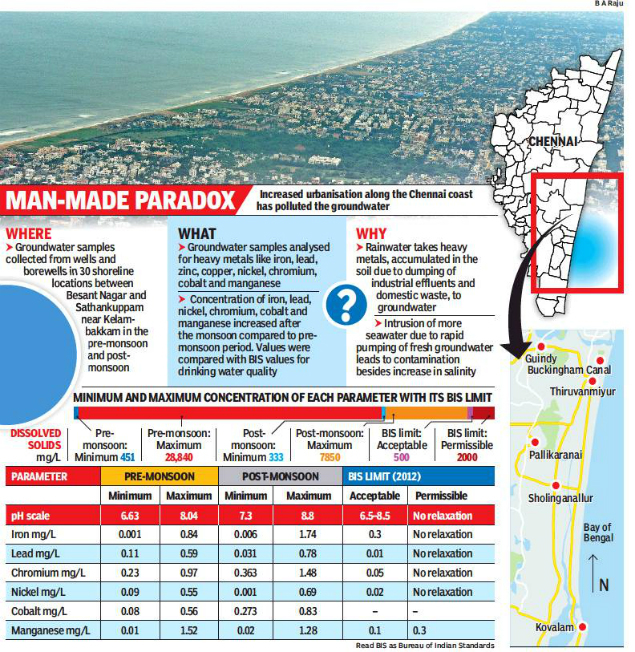 Researchers compared groundwater samples collected before and after monsoon with Bureau of Indian Standards (BIS) drinking water values and inferred that the contamination of groundwater was due to the dumping of industrial effluents and domestic waste which seep into the aquifers along with rainwater. According to BIS, if the quantity of any metal in water is beyond the acceptable limit, the water is rendered unfit for consumption.

“The groundwater is contaminated due to rapid urbanisation which results in increase in industrial effluents and dumping of domestic waste,” the study said, adding that the effluent discharge accumulates heavy metals in the soil initially and later moves to the aquifers when the rainwater percolates.

The study, published in Springer’s journal Applied Water Science in September 2017, was conducted in an area of 270sqkm along the Bay of Bengal and covered Thiruvanmiyur, Pallikaranai marshland, Sholinganallur, Kovalam and localities close to Buckingham Canal and Muttukadu backwater.

Researchers collected 30 samples of water from

wells and borewells, and studied the presence of eight metals. The levels of six metals were high. “The study area has been rapidly urbanised over the past few decades. This has deteriorated the condition of the aquifers,” the study said.

The study found that concentration of iron in the groundwater could be due to corrosion and leaching from pipes while lead concentration could be due to plumbing material like pipes that react to the alkaline water. Chromium comes from dumping of municipal waste, nickel from sewage and corrosion of nickel alloy material, cobalt due to leaching from solid waste and manganese from solid waste and automobile emission.

Doctors said consumption of water contaminated with such elements can cause several health problems. Lead could damage kidneys and cause hypertension, nickel could lead to loss of weight, damage the heart and liver, and manganese could cause permanent neurological disorders. Senior surgical gastroenterologist Dr S M Chandramohan said absorption of lead into the body could lead to acute abdominal pain called plumbism. “Usually when patients come with chronic abdominal pain, we will rule out other conditions before we conduct tests for lead content in the blood,” he said.